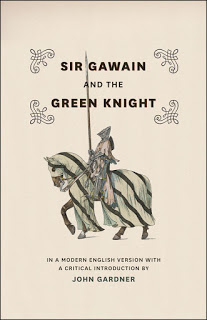 Sir Gawain and the Green Knight (Sir Gawayn and þe Grene Knyȝt) is a 14th century Arthurian chivalric romance, written by an unnamed writer who is often referred to as the Pearl Poet, which is split into four parts called FITS. In each fit there are many short stanzas which all end with a rhyming bob and wheel (the “bob” is a short line, usually not longer than two syllables and the “wheel” is made up of longer lines with internal rhyme). The poem follows Sir Gawain, one of the Knights of the Round Table, as he takes up a “beheading challenge” forced on him by the Green Knight, a mythic figure whom is said to be an allusion to Christ or a representation of the Green Knight of Welsh folklore. As said in another post last week I will be splitting up my Sir Gawain and the Green Knight reviews into four parts (Fit I, II, III, IV) and a general concluding post. This post will review FIT I.

Fit I is made up of twenty one stanzas with twenty four lines in each which include a five line bob and wheel at the end of each stanza. Sir Gawain and the Green Knight opens with a fictional account of the founding of Britain, describing the Fall of Troy and how heroes from that battle split up and founded the cities of Rome, Tuscany and Briton. The poem then introduces King Arthur, the most legendary King there ever was, and tells how the narrator will relate a story he heard in a hall about a great Arthurian adventure:

Straightaway shall I speak it, in the city as I heard it,
With tongue;
As scribes have set is duly
In the lore of the land so long,
With letters linking truly
In story bold and strong.

The narrator then moves on to the present, Christmastime in Camelot (New Years Day to be exact). King Arthur, Guinevere, the Knights of the Round Table and other lords have been feasting for fifteen days, and it’s now New Years Day. The court participates in the giving and receiving of gifts and then they sit down to feast. The narrator then describes the court of Camelot in beautiful verse:

…saving Christ’s self, the most celebrated knights,
The loveliest ladies to live in all time,
And the comeliest king to ever keep court.
For this fine fellowship was in it’s fair prime
Far famed,
Stood well in heaven’s will,
It’s high souled king acclaimed;
So hardy a host on hill
Could not be else named.

Arthur then announces that he will not eat until a good story is told, or some momentous marvel is seen before his eyes, and he sure as hell gets it (more about that later). The narrator describes the seating arrangements around the tables with King Arthur and Guinevere in the centre, with Gawain on Guinevere’s side (which side is not stipulated). As they are all (except Arthur) beginning to eat the first course an unknown knight enters the hall on horseback. He is described as an almost inhuman figure:

..an awesome fellow
Who in height outstripped all earthly men.
From throat to thigh he was so thickset and square,
His loins and limbs were so long and so great,
That he was half a giant on Earth, I believe
…men gaped at the hue of him
Ingrained in garb and mien,
A fellow fiercely grim,
And all a glittering green.

The narrator goes on to describe the Green Knight in minute detail, specifically focusing on the amount of green on his clothes, his horse and his weapons (including the green and gold axe which comes into play later). This, as theorised by critics, could be an allusion to the Green Knight in Welsh folklore. Others believe it’s an allusion to Christ. Personally I’m more convinced of the former but I’m no expert, obviously. Without introducing himself the Green Knight suddenly demands to be introduced to the “governor of this gathering”, and when he gets no reply he glares at everyone in the hall until King Arthur answers:

Throughout the high hall was a hush like death;
Suddenly as if all had slipped into sleep, their voices were
At rest;
Hushed not wholly for fear,
But some at honour’s behest;
But let him whom all revere
Greet that gruesome guest.

‘What, is this Arthur’s house, the honour of which
Is bruited abroad so abundantly?
Has your pride disappeared? Your prowess gone?
Your victories, your valour, your vaunts, where are they?
The revel and renown of the Round Table
Is now overwhelmed by a word from one man’s voice,
For all flinch for fear from a fight not begun!’

Arthur then states how foolish the Green Knight’s demand is but if the knight is so determined Arthur will grant his wish. Being a great knight himself, King Arthur offers to take on the Green Knight’s game and seizes the axe from the knight’s hand. However, he strikes and misses. This is theorised by critics to be because his wife is unchaste which is traditional in the failure of tests. Not all critics agree about this theory however. Gawain offers himself in Arthur’s place and both Arthur and the Green Knight accept. The Green Knight asks for Gawain’s name so they can affirm their pact and Gawain tells him then the Green Knight rejoices at the affirmation of their pact. However he introduced a further stipulation (that he won’t tell Gawain where to find him in one year and one day at this point in time) which shocks Gawain:

‘Except that you shall assent, swearing in truth,
To seek me yourself, in such place as you think
To find me under the firmament, and fetch your payment
For what you deal me today before this dignified gathering.’

The Green Knight then tells Gawain that he will tell him his name and where his home is located after Gawain has dealt the fatal blow. The Knight also states that if he doesn’t tell Gawain what he seeks to know then Gawain doesn’t have to deal a return blow. Gawain strikes the Green Knight and his head rolls on the ground. The court then kicks the head around which was a custom to stop the head of a supernatural being from joining the body once more. This fails as the Green Knight’s body picks the head up and holds his head by the hair. The court is once again shocked to the core. The Green Knight addresses Gawain, tells him that he will find him at the Green Chapel in one year and one days time and reveals his name, the Knight of the Green Chapel. The Green Knight suddenly rides out of the hall and disappears as fast as he arrived. Gawain and Arthur decide to hang the axe above the main dais so all the court can mark and marvel at it. They both then return to the feast. In the last bow and wheel of FIT I the narrator shares a warning directed at Gawain:

Now Gawain give a thought,
Lest peril make you pause
In seeking out the sport
That you have claimed as yours.

***************************
And that brings me to the end of FIT I and this post. I am thoroughly enjoying this poem so far. It’s incredibly beautiful and quite fast paced and just generally enjoyable.
Advertisement